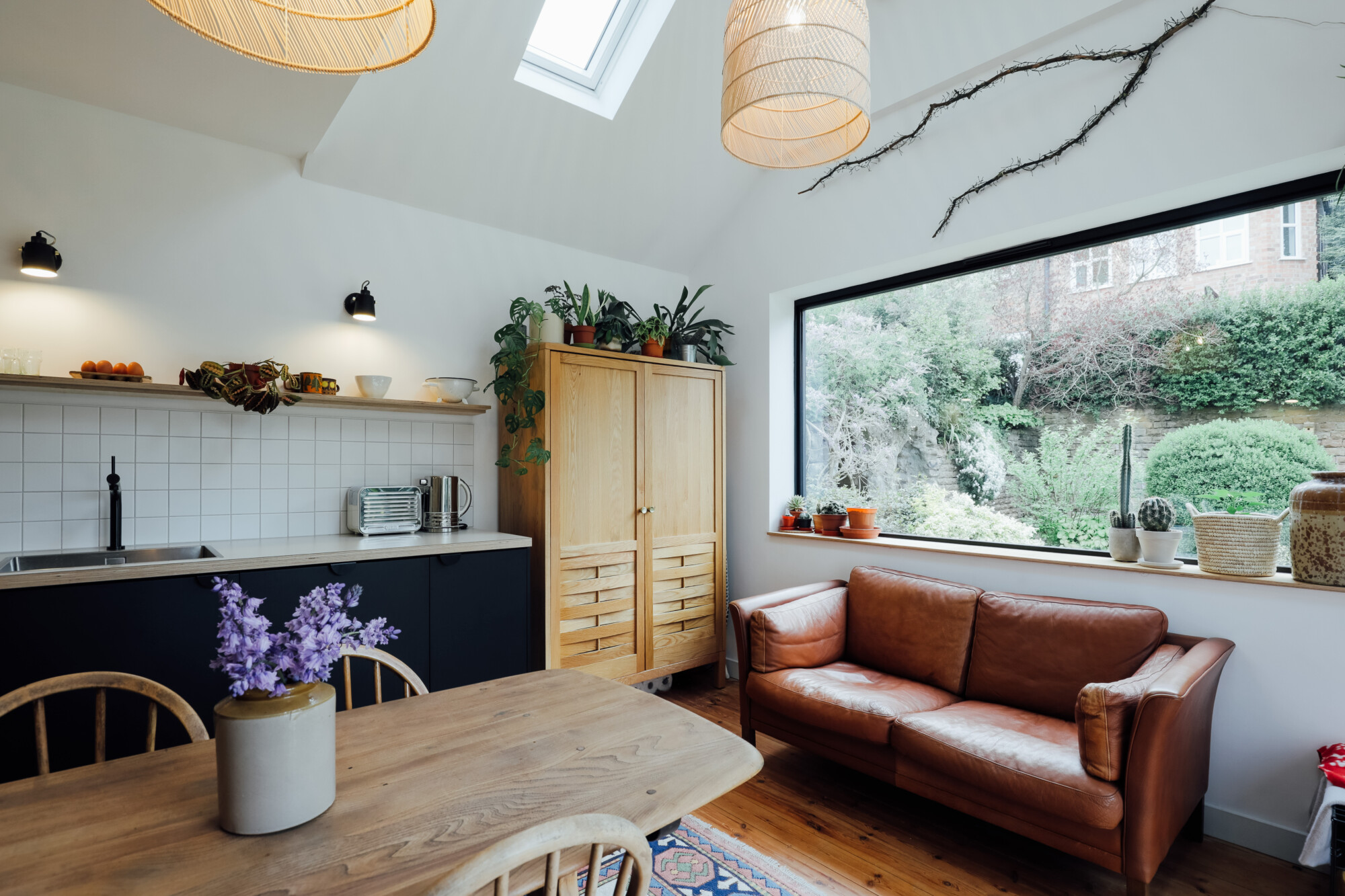 Originally from Leicester, Katy had previously lived in London for 8 years before moving to Nottingham in 2016 for work. Katy has always worked as an English teacher and is now doing a PhD in Literature; interior design is just a hobby.

“When I met my now husband, James, he moved into my house in the Meadows before we decided to buy the bungalow together.”

The couple like to spend most of their time walking the dogs (of which they have two) and making the most of Nottingham’s range of pubs.

Having bought their bungalow in 2018, both Katy and James spent around 6 months planning what to do with the new space they had, both indoors and out. Fast forward to March 2021 and they completed the renovation, taking a total of 2 and a half years from start to finish.

Katy and James decided to purchase the bungalow mainly for the outdoor space as it offered a large plot with an amazing garden and a range of outbuildings.

“We love the sense of space and peace here.”

The property had been very well looked after by the previous owner, however Katy felt that everything needed an update. They installed a new boiler, completely rewired, added new windows and doors and even reconfigured the layout, putting all of the living space at the back of the property to make the most of the south-facing garden.

Katy’s favourite part of their house is the fabulous kitchen-diner. The plan was to have a room that they could ‘hang out’ in throughout the day, with enough space to entertain friends and family, all flooded with an abundance of natural light.

“We decided to have a large picture window onto the garden, vault the back half of the ceiling and install skylights to open it up.”

Katy wanted to create a minimalist but warm feel with separate runs of units, open shelving and a larder cupboard. It needed to be clean and simple to make the most of the natural light at the back of the house, so she stuck to black and white colour scheme with a plywood worktop, and added a beautiful window ledge to create warmth.

Another stand-out feature of this incredible home is the unusual cave in the back garden. Being a Victorian folly, the cave predates the bungalow by around one hundred years.

“We were so surprised by the cave when we viewed the house and so is everyone who sees it; it’s a great contrast to the now very modern looking bungalow.”

When deciding how to decorate the house, Katy took inspiration from The Modern House and also used Pinterest to organise her ideas. Even though darker colours and maximalism has been a big trend over the past couple of years, Katy was drawn towards homes with neutral colours and warm wood, preferring clean lines with lots of natural light.

Paint can often maximise the feeling of space within a property, with Katy electing to go with bright white in the hall and kitchen, and warmer whites in the bedrooms and living room. They also installed flat profile light switches and sockets to keep everything minimal and streamlined.

“I wanted all the details to be spot on so even boring things were nice to look at.”

The off-white rooms are filled with incredible paintings and posters, which help to bring together their mix of vintage and antique furniture, most of which has been purchased from Ebay or Mellors & Kirk auctions in Nottingham.

“I really like the style of interior designers Bridie Hall and Beata Heuman, although they are a lot more bold in their colour choices than me. It’s the mix of print and pattern with natural materials that appeals.”

Katy and James love the area that they live in. Sherwood offers a range of independent shops, bars and restaurants, all of which the couple feel very lucky to live so close too.

“Brigitte Bordeaux is just at the bottom of the road and we love getting a bottle of wine there, or beers from Kraftwerks further down the high street.”

This property has recently been sold by our Partner Agent, Mark Howard.